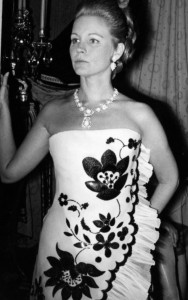 Martha Sharp Crawford was the only child of two wealthy Americans. Upon his death in 1935, her father, utilities magnate George Crawford, left his infant daughter $100 million. She became Princess von Auersperg in 1957, and she had two children with the Austrian prince. She led a glamorous society life, and was listed on the world’s best-dressed list. Sunny had a third child during her second marriage to British/Danish socialite Claus von Bülow. In the following years, her drug and alcohol abuse spiraled out of control. In 1980 she slipped into a coma from which she would never recover. This became the subject of the Oscar-nominated movie “Reversal of Fortune.” Claus was convicted of twice trying to kill his wife by insulin injection, but was acquitted upon appeal, when represented by famous attorney Alan Dershowitz. Sunny spent 28 comatose years in a nursing home before dying in 2008 at age 76.