Marlene Dietrich: The Woman and the Legend 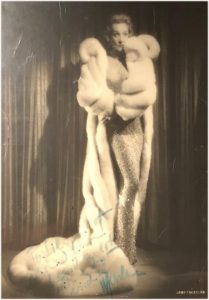 In the 1960s René attended boarding school in Gstaad, Switzerland with two of Marlene Dietrich’s grandsons. When she came to the Palace Hotel to perform her world famous, one-woman show, René was asked to be seated at her table. He was understandably star-struck by the glimmering star and never forgot every detail of the dazzling event.

Few Hollywood icons have attracted our attention for longer than Dietrich. Although she started her career in Germany doing cabaret and dancing in chorus lines. By 1930 she was hailed in Hollywood as Paramount’s answer to MGM’s Greta Garbo.

Dietrich’s long working and personal relationship with director Josef von Sternberg, brought her initial fame and fortune. He recreated her as a glamorous femme fatale and made her the highest paid actress.

She reinvented herself several times throughout her long career. Her serious work ethic and personal discipline endeared her to the film industries’ best producers and directors.

Just before the Second World War, the Nazis tried to woo her back to Germany, to no avail. Instead of performing in Hitler’s Germany, she went to work for the American war effort. Her courage during the war earned her many awards from the USA, France, and even Israel.

In the 50s she once again changed her focus and became the highest paid cabaret artist. Guided by Burt Bachrach she created a one-woman show, which she began in Las Vegas, where she was paid $30,000 a week. During the ensuing two decades she performed the show all over the world.

Although married only once, and for 53 years, she had dalliances with most of her leading men, including Jimmy Stewart, Gary Cooper, and Cary Grant. Being the product of the 1920’s “Golden Age of Weimar” environment, Dietrich also had affairs with women like Edith Piaf and Dolores del Rio.

In his inimitable story-telling fashion, René will present a picture of Marlene Dietrich as a multi-talented, multi-lingual, truly international icon, who camouflaged her flaws and maximized her talents.