Born in 1887, Marjorie was the only child of C.W. Post, and eventually the sole heir to the Post Cereal Company fortune, which her father had founded in 1895. After inheriting what had become an iconic American company when her father committed suicide in 1914, she turned it into one of America’s greatest dynastic fortunes by creating General Foods in 1923.

Mrs. Post had two daughters with her first husband, Edward Bennett Close, whom she divorced after 14 years to marry the “love of her life” E.F. Hutton, the creator of retail stock brokerage. 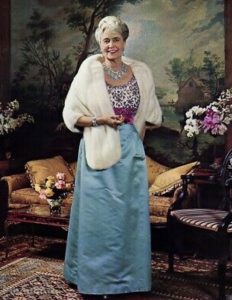 Mrs. Post’s marriage to E.F. Hutton, uncle to the infamous Barbara Hutton, lasted from 1919 to 1935. Their only daughter, Dina Merrill, grew up to be a glamorous Hollywood star. It was during her marriage to Hutton that Marjorie built the famous Mar-a-Lago in Palm Beach, the property that spans from the ocean (Mar) to the lake (Lago).

During her third marriage, to Joseph Davies, Marjorie became America’s first ambassador’s wife to serve in Soviet Russia. She enchanted Russian politburos’ wives who helped her acquire the world’s greatest collection of Russian imperial art outside Russia. During World War Two, Marjorie was heavily involved in US politics, working beside Eleanor Roosevelt.

Over time Marjorie successfully overcame the societal barriers to a woman running a large American company. She never abandoned her father’s philosophies, including a healthy lifestyle and “giving back” to less fortunate people. Using numerous classic pictures and videos, Silvin will bring to life her extravagant entertainment style.

Mrs. Post died in 1973 at age 86 of heart failure. Her biographer, Nancy Rubin accurately referred to Marjorie as an “American Empress.”

Watch the Post presentation at the Polo Club of Boca Raton