What do Marjorie Merriweather Post, Birds Eye Frozen Food, actress Dina Merrill, the Hutton family and President Trump have in common? All of them have a direct connection to the magnificent Mar-a-Lago mansion in Palm Beach, Florida, which stretches from the Atlantic Ocean (Mar) to Lake Worth (Lago). Since its current owner, Donald Trump, became the 45th President of the United States, Mar-a-Lago has become an international household name and subject of intrigue. 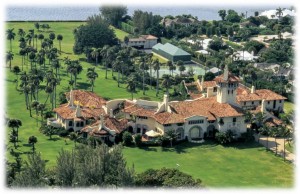 Silvin describes the mansion’s construction, which started in 1924 at the height of Florida’s construction boom. Completed in 1927 when the Florida real estate and banking bubbles had burst, Mar-a-Lago’s 600 construction workers helped support the local economy. The fortune that paid for the construction came from the Post Cereal empire founded by C.W. Post in 1895. His only daughter, Marjorie Merriweather Post, inherited the Postum Cereal Company, and turned it into General Foods in 1923, creating one of America’s greatest fortunes.

Married to her second husband, E.F. Hutton, she fantasized about building a unique mansion. Hutton initially hired the Beaux-Arts trained Marion Simms Wyeth, but Marjorie yearned for an architecturally complex fantasy land. She added Austrian born, illustrator and famed stage set designer, Joseph Urban into the design team. The result is a unique palace/home with a whimsical, theatre-inspired theme.

Mrs. Post’s marriage to E.F. Hutton, uncle to the infamous Barbara Hutton, lasted from 1919 to 1935. Their only daughter, Dina Merrill, grew up to be a glamorous Hollywood star, but always returned to Mar-a-Lago, the place where her happiest childhood memories were born. She lived in “Deenie’s House,” an integral part of the Mar-a-Lago compound, designed with a bed, murals and carpet with themes from Sleeping Beauty.

The presentation includes a description of the Post family history, which imprinted in Marjorie a thrust for art, lavish living and important charitable contributions. She never abandoned her father’s philosophies, which included a healthy life-style in search of art and beauty, and “giving back” to less fortunate people. Using numerous classic pictures and videos, Silvin will bring to life the extravagant entertainment style Mrs. Post enjoyed at her favorite home for 45 years, until her death in 1973.

Mar-a-Lago then entered a 12-year hiatus, during which it narrowly averted the wrecking ball on numerous occasions. 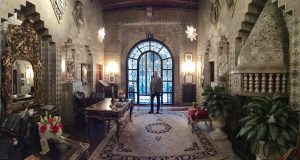 In the hope of turning the estate into a Winter White House for future Presidents and foreign dignitaries, Mrs. Post’s Will bequeathed the house to the United States Government. As was the case with similar “gifts” of huge mansions to public organizations, Mar-a-Lago was deemed too expensive to maintain, and it was given back to the Post Foundation. Mar-A-Lago fortunately gained landmark status in 1980, at the beginning of landmarking in Palm Beach, which saved the mansion.

During the late 80s and early 90s, the property went through a period where several options for its future were, yet again, explored. Many of these creative choices would have destroyed Mar-a-Lago’s special character. In the end the mansion was turned into a private club, and since then a beach club and ballroom have been tastefully added, which in no significant way altered Mrs. Post’s design.

In 2016 Mrs. Post’s dream of creating a Winter White House came to pass when Donald Trump became President of the United States. Mar-a-Lago’s only alteration since becoming the 45th President’s home, is a Landmark Commission approved addition of a helicopter pad, to accommodate the presidential helicopter: Marine One.

Due to the many visits President Trump makes to his self-admitted sanctuary, Mar-a-Lago has become the focus of both national and international attention and curiosity. When the President is in residence, serious local traffic and organizational challenges occur.

This is a historical lecture, not a political one.