The Four Lives of Jackie O

1929 – 1953 covers details of Jacqueline Bouvier’s parents and reviews her youthful accomplishments as a talented equestrian, debutante, linguist, and art-historian.

1953 – 1968 discusses Jackie’s life as Mrs. John F. Kennedy, including her support of her husband’s political career, her 3-year tenure as America’s 35th First Lady during the “Camelot era.” After JFK’s assassination she remained active as what Life magazine called “America’s unofficial roving ambassador.”

1968 – 1975 explores the highly controversial and publicized period which followed her famous statement: “They are killing Kennedys.” Jackie married Greek shipping tycoon, Aristotle Onassis. This part of the presentation will include personal anecdotes because Mr. Silvin interacted with the Onassis children and “Jackie O.”

1975 – 1994, which is arguably the most peaceful period of her life. Jackie worked as an editor, notably for Doubleday, and lived with her supportive companion Maurice Tempelsman. René will discuss details of her death at age 64 in May of 1994. 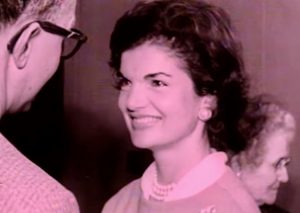