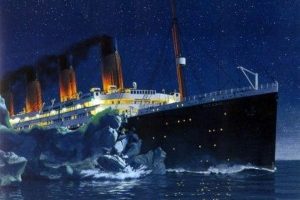 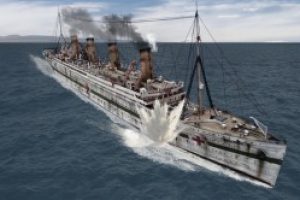 This presentation begins with the most famous maritime accident, the Titanic, then the largest ship in the world which sank on its maiden voyage with huge loss of life.

Less well-known, four years later her sister, the Britannic, serving as a hospital ship, also sank. She was the largest ship lost during World War One.

Another victim of WWI was the Lusitania, which took her ill-fated last journey in 1915. She was sunk by Germany’s newest and, as of then still untried weapon, the U-boat.

The 1930s saw the boom of ocean liner travel as the great liners reached their pinnacle of luxury, speed and service. With glamour and pride, France built the most majestic liner ever: SS Normandie. Unfortunately, WWII brought the industry to an abrupt halt, and led to the sinking of the magnificent Normandie in the harbor of Manhattan.

After the world recovered from WWII, ocean liners experienced one last period of glamorous ocean travel. Determined to recreate an earlier grandeur, the Italian Line launched a new flagship, Andrea Doria. For 3 years in the 1950’s she was the most notable ship sailing the southern route, to and from New York, through the Mediterranean. She sank after being rammed by the Swedish Stockholm near Nantucket in July 1956. Her sinking was the first time such a catastrophe was filmed by circling airplanes.

In his inimitable way, René Silvin will bring these ships, who will forever hold our fascination and imagination, back to life.

Watch the virtual version of this lecture here, as presented to the Jewish Federation of South Palm Beach County on May 5, 2020.