NOBLESSE OBLIGE
The Duchess of Windsor as I knew her

With the recent comparison of Meghan Markle to Wallis Simpson, as well as the popular Netflix series “The Crown”, the Duchess of Windsor has become a hot topic once again. This updated presentation will include clips from “The Crown”, illustrating what the series got wrong, and what they got right. Meghan and Harry will also be discussed to see what similarities and differences there are between the royal couples.

Silvin will present the story using personal accounts of his relationship with the widowed Duchess, when he became her confidant and escort during the period following the Duke’s death, and before the onset of her dementia. As the son of a former friend (René’s mother lived next door to Wallis during the abdication crisis), he was the perfect companion to escort her to the few social events she still attended.

The story begins with Prince Edward’s much celebrated youth, and simultaneously “Bessie Wallis Warfield’s” sad childhood. The audience will learn about the beloved young Prince’s widely publicized world tours, his becoming the most popular Prince of Wales in British history, followed by his Royal Highness’ girlfriends, before meeting the previously divorced Mrs. Simpson. Rare shots of Wallis as Mrs. Spencer and her mysterious period in China are included. In 1929 she moved to London with her second husband, Ernest Simpson, where she met the Prince of Wales. She eventually became the royal mistress, leading to her second divorce.

The story continues with “David,” as the Prince was known to his friends, ascending to the throne in January of 1936, and details the abdication crisis. This includes the first paparazzi chase in history as Mrs. Simpson, fearing for her life, escaped England on the eve of the abdication.

René covers the Duke and Duchess of Windsor’s wedding, honeymoon and their ill-advised trip to Nazi Germany in 1937, a trip which haunted them for the rest of their lives. The story then follows the Windsors’ service as Governors of the Bahamas during World War Two, and their post-war lives as they became the most sought-after members of international high society. The duchess rose to become number one on the Best Dressed List, and brilliantly created a “brand” which allowed the Duke and Duchess to live a life of luxury beyond their means. 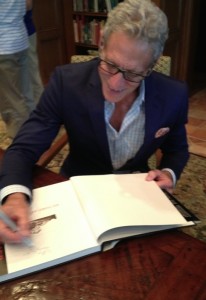 Details will be revealed of the little known “rapprochement” the famous couple had with the Duke’s niece, Queen Elizabeth.  The famous couple had many years of regular travel between their magnificent homes in Paris, New York and Palm Beach, Florida. Numerous pictures are included of the opulent places where the Windsors lived, mostly provided by the largesse o

f their wealthy friends. The presentation covers the duke’s illness and death, when Silvin was managing the hospital in Paris where both Windsors were treated.

The story ends with the long, sad decline the paralyzed duchess suffered during the final 5 years of her life. René describes his sad goodbye to the duchess, her death, her funeral, and the sale of her world-famous jewels.